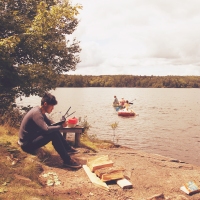 In the world of books, we reserve the word ‘opus’ for works that are generally long. Hefty hardbacks that weigh heavier than bricks, things that make you go ‘ooph’ when you pick them off the bookshelves or get them in the post, daunting in the way they can stand on their own.

The Big Green Tent is long, yes, but it’s cavernous. It revolves around Ilya, Sanya, and Mikha, three boys who were tutored by Victor Yulievich, and henceforth called LORLs (Lovers of Russian Literature). In Soviet Russia, a decade or so after Stalin’s death, it isn’t all sunshine and rainbows for the boys, then men, then witnesses with memories. The novel spirals centrifugally from these characters, Ulitskaya affording equal care to develop the stories of the women, Olga, Alyona, and grandma Anna. Their narratives are gripping and all along I wonder if I would’ve had been as headstrong as any of them were I to live under such a police state. Yet, my favourite part of The Big Green Tent are the interspersed short stories, if you will, of minor characters around the country only loosely connected to the LORLs.

As though we were given keys to the city, or floating from above, given free rein to look in on whoever wanted. We’re granted a snippet, for example, of the start of Boris Ivanovich’s life as a fugitive. Tucked in between the collapse and crumble of the other characters, it seems random. For me, it carries with it Ulitskaya’s fascination of ‘chance.’ It’s perhaps not a coincidence that the following is repeated word for word on more than one occasion throughout this behemoth of a book:

It’s fascinating to trace the trajectories of people destined to meet. Sometimes such encounters happen without any special effort of fate, without elaborate convolutions of plot, following the natural course of events.

Swaying from present to past to what might very well be a near future of surveillance and hard censorship, what’s beautiful is that Ulitskaya’s novel is never convoluted. It may be intimidating, but it’s a very easy, natural read. 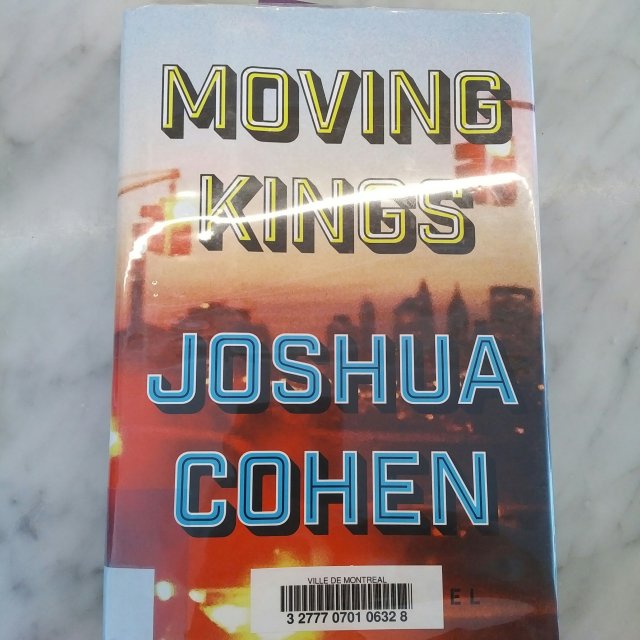 Moving Kings follows the lives of two Israelis navigating a post-war life in New York. Miles away from home in Israel, Yoav is determined, if not necessarily happy, to be in Manhattan, toiling away for his American uncle’s moving company. Yoav’s duty to empty out Palestinian houses during the unspecified intifada and new job of having to evict tenants way too late on rent is an easy subject to mine for sentimentality and juxtaposition. Even the team of movers at Moving Kings had nicknames that you could see being used on a camo-filled action-thriller-heist starring LL Cool J: Tinks, Burrito Ron, Talcum X.

What I found more interesting was the arrival of Yoav’s platoon mate, Uri. Reminiscent of the film Jarhead (Sam Mendes), the novel posed what Anthony Swofford found so perplexing as he stood around in a Middle Eastern nameless place burning to the ground, “All (Alan Troy) wants is in, all I want is out”—the location referring to the army. Uri is hot-headed, everything around him a potential weapon, philosophical even in his bouts of physical aggression (“Whatever I do, I have to break your body at the center, each half going different directions. All attacks must reach to both sides of this line”)

Amidst these themes, Cohen’s writing can be very light and humorous. If his previous novel, Book of Numbers, was a 600-page post-modern ramble, this one was condensed and calculated. One wonders how long (and how) Cohen came to describe a wallet’s contents as including “the card that was always just a punch away from a free bagel” or  winter as a “white prayer rug over everything” in a novel with religious depths.

I hope there’s more to come from one of Granta’s Best Young American Novelists.

Brisbane’s music festival and industry conference is in its seventeenth year. I haven’t a clue how they promoted themselves back then but these days a playlist on Spotify is all one needs to discover which bands in attendance—labelled as the future of music by BIGSOUND—one might be interested in catching at Fortitude Valley.

It turns out the future of music sounds pretty much like the present, or the past has been ahead of its time. Diversity in backgrounds and genres is apparent (though for now there is just one non-English-language act), but nothing is inherently revolutionary. If novelty is good, then BIGSOUND 2018 doesn’t really warrant many stars.

However, if imitation is some sort of flattery et cetera, then there are some cuts worth listening to here.